Fitness vlogger John David Glaude of the YouTube channel Obese to Beast has lost 160 pounds since he started getting into fitness, and that’s come with a side effect he didn’t originally expect: A lot of loose skin. It’s a predictable result of extreme weight loss, but not one that’s been well-documented in American culture. Glaude wanted to do his part to change that, so this weekend he posted a vlog titled “My Biggest Insecurity: Loose Skin.” In it, he demonstrates some of the ways he creates the illusion of not having loose skin, and shows the areas of his body that were the most effected by the extreme weight loss – his arms, chest, stomach, and thighs. You can hear an anxiety in his voice that isn’t present in his other videos while he’s undressing and explaining how he hides the skin, what he does to feel comfortable in public, and how he’s felt about the way his body looks unclothed. “I want people watching this video to understand that you should never let loose skin or anything else stop you from going for your dreams,” he says. “My dreams are to be very happy in my skin, and I am.”

It is incredibly brave to be so public about this. The fitness community has become more open and honest about loose skin and what a body really looks like post-weight loss. You can find plenty of conversations about it on fitness forums, and there’s a lot of emphasis on the idea that the main reason to get into fitness is to improve the way you function in your life, not just to be happier with your looks. But what Glaude says in the video is more on point: It’s OK. All bodies are OK. 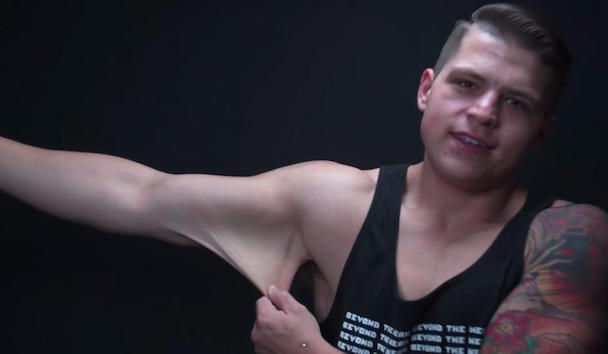 He does look good. It sucks that we live in a culture that presents “perfect” bodies as the norm from which anything is an unacceptable deviation, whether that’s a body that’s too thin, too fat, too short, too hairy, too pimply, or with too much skin, and it sucks that Glaude can’t just go to the beach and enjoy himself without having to worry about his loose skin showing. In real life, all human bodies are incredibly diverse and incredibly imperfect, and that’s the beauty standard we should be setting. ( Source: Refinery29.com ) For more information, follow John on his Facebook page below.