There was a ray of hope recently for those who are looking forward to a car that’s a bit more Blade Runnery as Terrafugia’s Transition flying car made its first public flights at EAA AirVenture in Oshkosh, Wisconsin. There, the Terrafugia team conducted two 20-minute flight demonstrations and also showed off the capability for the Transition’s wings to be folded up so it can be driven about like a car. Classed as a light sports plane by the United States Federal Aviation Administration (FAA), the Transition is also a road-legal vehicle. Technically, it isn’t a flying car so much as a roadable airplane capable of carrying a pilot/driver and one passenger. The company sees it as a way for private pilots to cover that “last mile” between a small airport and their destination without using a taxi of hauling along a motor scooter. 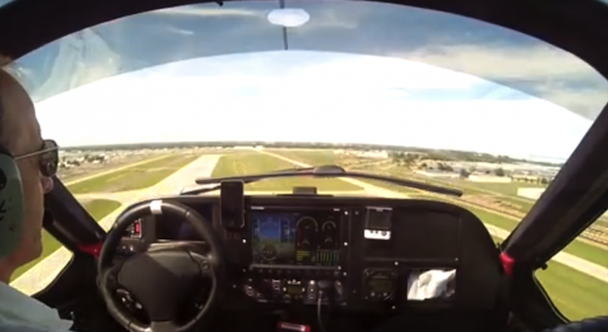 It’s been under development for seven years, including flight testing last year, but underwent a number of modifications this year in an effort to improve handling. In a statement, the company said, “Terrafugia made a dream come true at this year’s EAA AirVenture Oshkosh. The Transition performed its first public demonstrations for the aviation community during the show. Flown and driven by Phil Meteer, our Chief Test Pilot and Flight Test Coordinator, the Transition showed the crowd what it’s capable.

The 20-minute demonstrations included flight maneuvers over show center, converting from airplane to car, and driving along the flight line.” The TerraFugia Transition is currently priced at US$279,000 but no delivery date has been announced. ( By David Szondy from www.gizmag.com ) The video below shows the Terrafugia Transition’s first public flights. More information at the link after.