Zdzisław Beksiński (1929 – 2005) was a renowned Polish painter, photographer, and sculptor. Beksiński executed his paintings and drawings either in what he called a ‘Baroque’ or a ‘Gothic’ manner. The first style is dominated by representation, with the best-known examples coming from his fantastic realism period when he painted disturbing images of a surrealistic, nightmarish environment. The second style is more abstract, being dominated by form, and is typified by Beksiński’s later paintings. Beksiński was murdered in 2005. Beksiński as a young boy and a friend play in the rubble of a destroyed Soviet bunker, summer 1941, Sanok. Beksiński was born in the town of Sanok, in southern Poland. After studying architecture in Kraków, he returned to Sanok in 1955. Subsequent to this education, he spent several years as a construction site supervisor, which he hated. At that time, he became interested in artistic photography and photomontage, sculpture and painting. He made his sculptures of plaster, metal and wire. 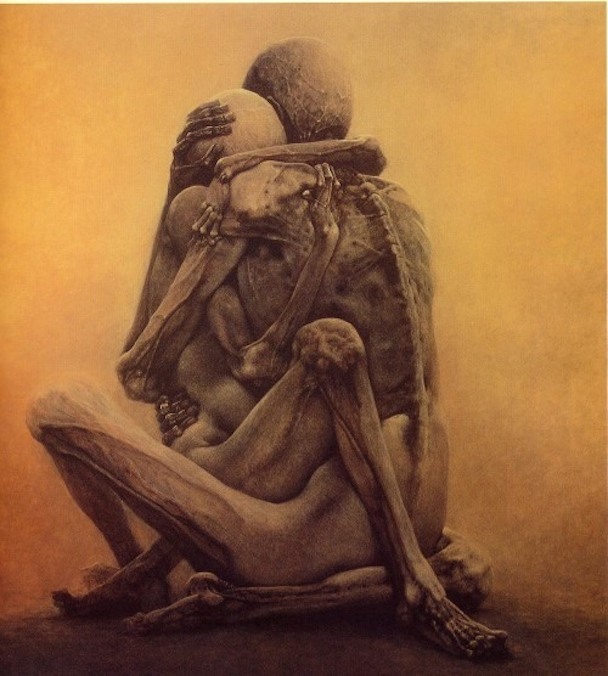 His photography had several themes that would also appear in his future paintings, presenting wrinkled faces, landscapes and objects with a very bumpy texture, which he attempted to emphasize (especially by manipulating lights and shadows). His photography also depicted disturbing images, such as a mutilated baby doll with its face torn off, portraits of people without faces or with their faces wrapped in bandages. Later, he concentrated on painting. His first paintings were abstract art, but throughout the 1960s he made his surrealist inspirations more visible. Beksiński had no formal training as an artist. 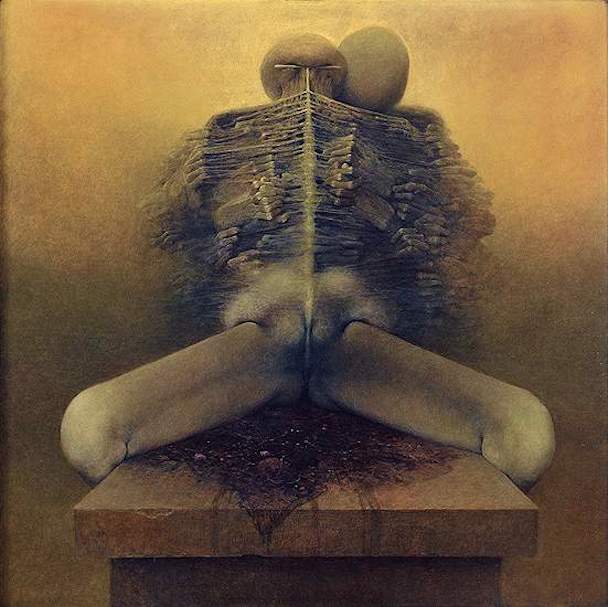 His paintings were mainly created using oil paint on hardboard panels which he personally prepared, although he also experimented with acrylic paints. He abhorred silence, and always listened to classical music while painting. Although he loved classical music, Beksinski appreciated rock music as well. A prestigious exhibition in Warsaw in 1964 proved to be his first major success, as all his paintings were sold.

Beksiński threw himself into painting with a passion, and worked constantly (always to the strains of classical music). He soon became the leading figure in contemporary Polish art. In the late 1960s, Beksiński entered what he himself called his “fantastic period”, which lasted up to the mid-1980s.

This is his best-known period, during which he created very disturbing images, showing a surrealistic, post-apocalyptic environment with very detailed scenes of death, decay, landscapes filled with skeletons, deformed figures and deserts. These paintings were quite detailed, painted with his trademark precision.

At the time, Beksiński claimed, “I wish to paint in such a manner as if I were photographing dreams”. Despite the grim overtones, Beksiński claimed some of his works were misunderstood; in his opinion, they were rather optimistic or even humorous.

For the most part, though, Beksiński was adamant that even he did not know the meaning of his artworks and was uninterested in possible interpretations; in keeping with this, he refused to provide titles for any of his drawings or paintings. Before moving to Warsaw in 1977, he burned a selection of his works in his own backyard, without leaving any documentation on them. 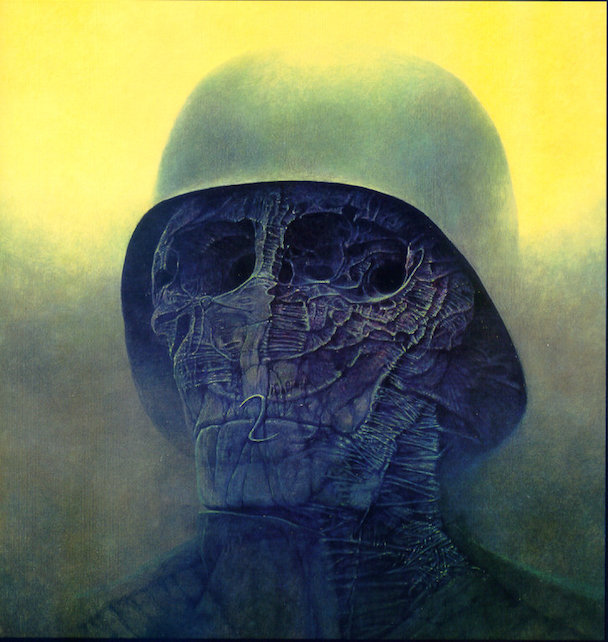 He later claimed that some of those works were “too personal”, while others were unsatisfactory, and he didn’t want people to see them. The 1980s marked a transitory period for Beksiński.

During this time, his works became more popular in France due to the endeavors of Piotr Dmochowski, and he achieved significant popularity in Western Europe, the United States and Japan. His art in the late 1980s and early 1990s focused on monumental or sculpture-like images rendered in a restricted (and often subdued) color palette, including a series of crosses.

Paintings in these style, which often appear to have been sketched densely in colored lines, were much less lavish than those known from his “fantastic period”, but just as powerful. In 1994, Beksiński explained “I’m going in the direction of a greater simplification of the background, and at the same time a considerable degree of deformation in the figures, which are being painted without what’s known as naturalistic light and shadow. What I’m after is for it to be obvious at first sight that this is a painting I made”. In the latter part of the 1990s, he discovered computers, the Internet, digital photography and photomanipulation, a medium that he focused on until his death.