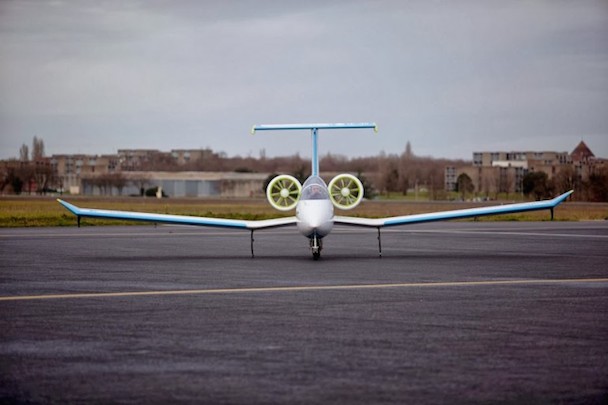 Manned electric-powered aircraft have made record-breaking flights and turned more than a few heads in the past few years, and it’s not a trend that’s likely to slow down. The E-Fan electric trainer airplane developed by the Airbus Group made its first public flight before a collection of French dignitaries. Currently a demonstrator for electric aircraft technology, Airbus says that is will be used as the basis for building a new pair of electric training aircraft models. Developed by Airbus Group (formerly EADS) working with a consortium of European aerospace companies, the E-fan made its first non-public flight at the Bordeaux Mérignac airport on March 11. The project evolved from the Cri-Cri electric plane, which Airbus used as a test bed and flying laboratory for developing the battery and energy management technology used in the E-Fan. 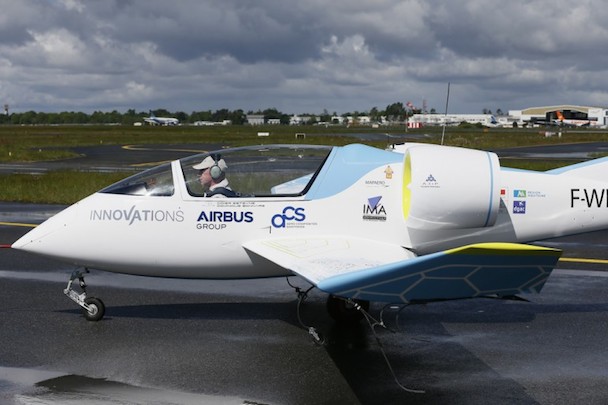 Built with an all-composite construction, the E-fan is 6.7 m (22 ft) long and has a wingspan of 9.5 m (31 ft). From the outside, it almost looks like a toy jet aircraft with a pair of nacelles that aren’t jets, but two ducted, variable pitch fans spun by two electric motors with a combined power of 60 kW. The ducting increases the thrust while reducing noise, and by centrally mounting them, the fans provide better control. 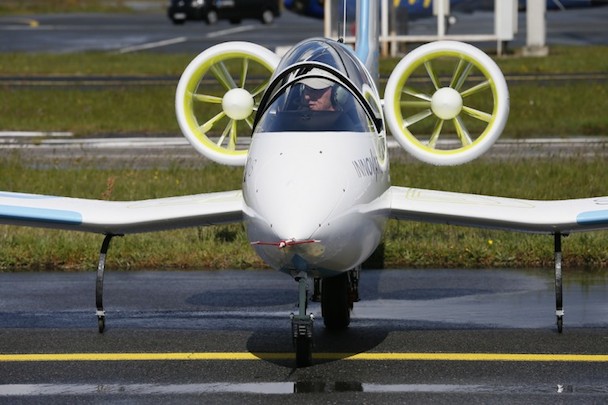 Powering the fans are a series of 250 V lithium-ion polymer batteries made by KOKAM of the Republic of Korea. These batteries are mounted in the inboard section of the wings and carry enough charge for up to one hour of flight and can be recharged in one hour.

For those worried about the “recharge” light coming on while up in the air, there’s also a backup battery onboard for emergency landings. A key technology on the E-Fan is its E-FADEC energy management system, which automatically handles the electrical systems. According to Airbus, this simplifies system controls and, since E-Fan is a trainer, eases the workload of instructors and students. A neat little party trick for the E-Fan is it’s undercarriage, which is made up of two retractable wheels fore and aft and two more under the wings.

The aft wheel is powered by a 6 kW electric motor, which not only powers the plane while taxiing, but also accelerates it on takeoff to 60 km/h (37 mph), which relieves some of the burden on the flight motors. Airbus Group plans to exhibit the E-fan at ILA Berlin and the Farnborough Air Show. Airbus will further develop the E-Fan technology demonstrator and to produce and market two versions of the aircraft by a subsidiary named VoltAir called E-Fan 2.0, which will carry two passengers and the e-Fan 4.0, which will carry four. While the 2.0 will be battery powered, the 4.0 will be a hybrid for greater range. ( By David Szondy from Gizmag.com ) The video below introduces the E-Fan.